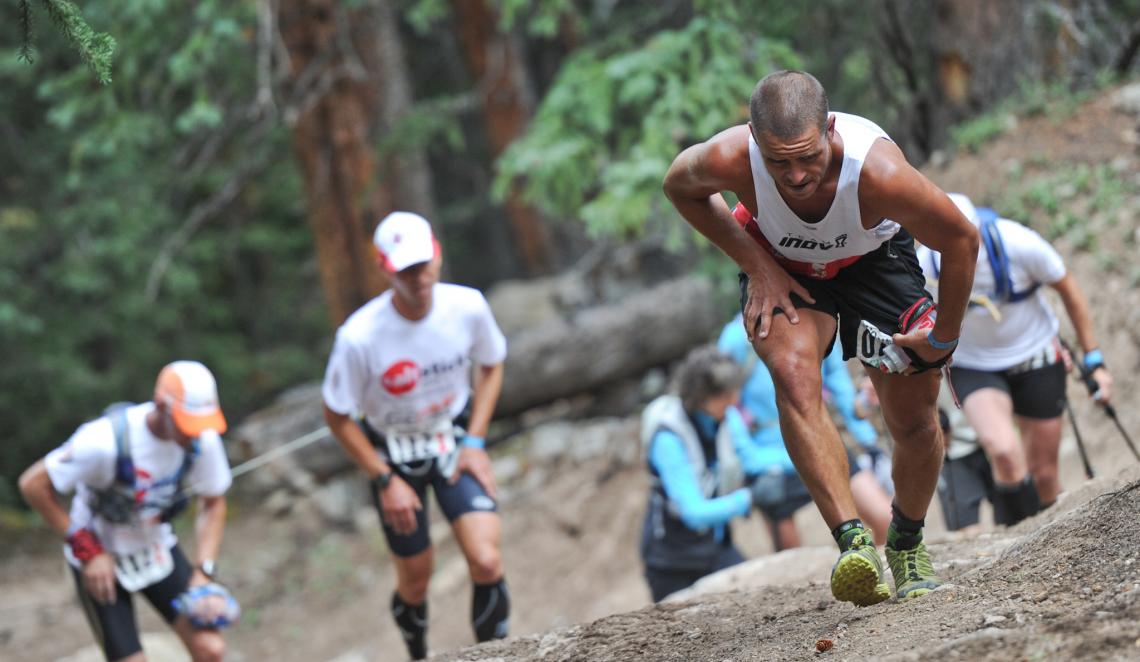 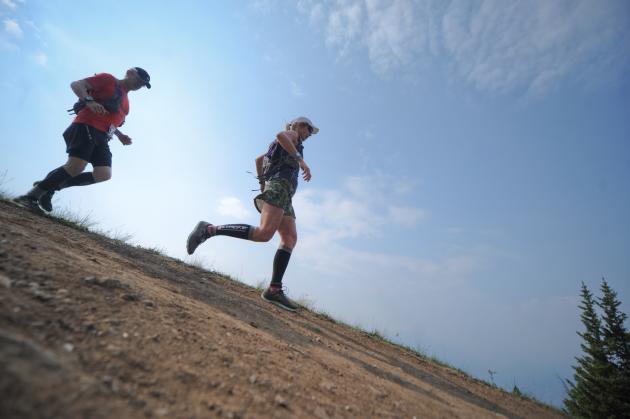 The trail just got a little quieter.  Last night we bid farewell to our amazing RUN3   Trail Striders.  Today the GORE-TEX® TransRockies Run continued its march through the Colorado Rockies with 106 teams of two, battle weary runners.   Stage 4 represents the passing of the halfway point of the race, the opportunity for runners to look back on what they've accomplished and a look forward to what's to come.

One of the best features of Stage 4, outside of the spectacular 360 views from the top of Hornsilver Mountain?  The runners will get to spend a second night in the Nova Guides camp.  No morning rush, no packing, no dragging heavy bags to the baggage crew.  Today it's all about the run.

The 8 AM start meant some cool temperatures and some noticeably stiff and sore runners.  By day 4 the stress of the previous 3 days starts to catch up and it takes a little bit longer to loosen up each day.  Quads are stiff from descents, toes are bruised from constant pounding, skin is sunburned...the list goes on and on.  Fortunately Stage 4 offered up a 2 mile warm-up before the ascent to Hornsilver Mountain.

As usual, the Team Flagstaff duo of Ron Krar and Michael Smith moved to the front of the pack and never relinquished the lead.  By the time they hit the Red Cliff finish line they were 9:44 in front of second place finishers, Justin Ricks and Jim Rebenack, notching their 4th stage win in the Men's Open division with  a time of 1:43:54. With over an hour lead and only two stages to run, it looks like this team will be next to impossible to beat.  Even more dominating has been the performance of Team Ooh la La Sportiva.  Jenny Capel and Pam Smith won stages 1,2 and 3 and ran their streak to 4 wins with a time today of 2:27:25.

Descending from Hornsilver the balance of the field seemed to have worked through soreness brought on by over 10,000 feet of elevation gain over the previous 3 days. A small water crossing, two miles from the finish, presented an opportunity to play.  Nothing like a little 'puddle' of water to turn grown adults into children again.  Splashing,  jumping, piggy back rides, and the occasional fall, were the order of the day along with plenty of smiles.  Zach Violet and Stephanie Howe, of The North Face Bendites, had plenty to be happy about as they closed in on their 4th win and lengthened their overall lead in the Open Mixed division to 50 minutes and 37 seconds.

As advertised, the finish line, at Mango's Bar and Grill in Red Cliff, was one popular destination.  The runners crossed the line and hung a quick left for fish tacos and margaritas.  While we're not sure that the Caba-nators, Jeff and Katie Caba, sampled the local fare, we know they crossed the line in front of all their 80+ Mixed division counterparts.  Four stages and four wins for a 32 minute and 38 second overall lead.

The competition in the 80+ Women's division continued to impress.  After a 2nd place finish on Stage 1, Missy Berkel and Sue Lee, of Team Titanium, put together a string of 3 wins and, today, replaced Valerie Lacarriere and Marielle Chabaud atop the overall podium.  The next two days will reveal if Team Resilience can live up to their name and take back the 2 minutes and 48 seconds lost today.

Stage 5 from Red Cliff to Vail is looming.  The 2nd longest stage with the 2nd greatest elevation gain of the week, this stage, like the four before, is sure to push our Trail Striders limits of physical and mental endurance.